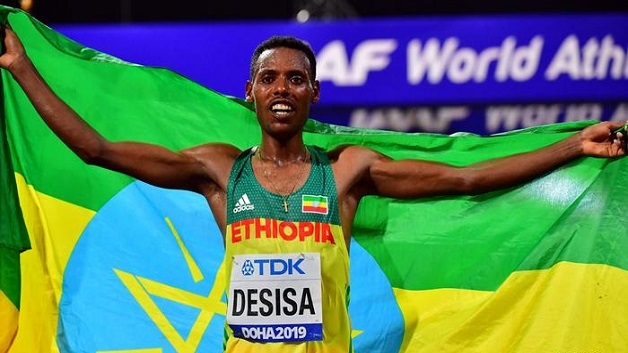 Ethiopia’s Lelisa Desisa has won the men’s midnight marathon in a sprint finish at the World Athletics Championships in Qatar, ending an 18-year-wait for a world title over the long distance for his country.

The 29-year-old crossed the finish line in 2 hours 10 minutes and 40 seconds at the Doha Corniche promenade in the Qatari capital, Doha, where the temperature in the midnight race was high again but humidity far lower than at past road races.

The race in Doha ended in heartbreak for Britain’s Callum Hawkins who managed to close the gap on the leaders near the end only to finish fourth for the second time running – this time missing out on the medal by six seconds.

“This is for 100 million of Ethiopians who were behind me,” said Desisa. “I am the second man from my country to win this title and it is not just for me, it is for my country.”

As with the other road races during the championship, the race started just before midnight to escape the worst of the heat and humidity.

Conditions were less brutal than a week ago for the women’s marathon – when 28 out of the 68 runners failed to reach the finish line – although it was still 29 degrees Celsius (84F) with 48.6 percent humidity at the start, organisers said.

Fifty-five of the 73 starters completed the course for the men’s marathon, with the last runner, Nicolas Cuestas of Uruguay, finishing half an hour behind the winner.

Desisa said he had been training especially for the conditions.

“I trained in a place with these weather conditions, so this race was not hard – it was similar to my training,” he said.

The runners did six laps of a seven-kilometre loop of Doha’s waterfront.

Other events of the championships have taken place at the Khalifa International Stadium, which has an advanced open-air and environment-friendly cooling technology to keep the pitch temperature at an optimum 26C (79F).

The 17th edition of the world championships, the first to be held in a Middle Eastern country, will wrap up on Sunday.