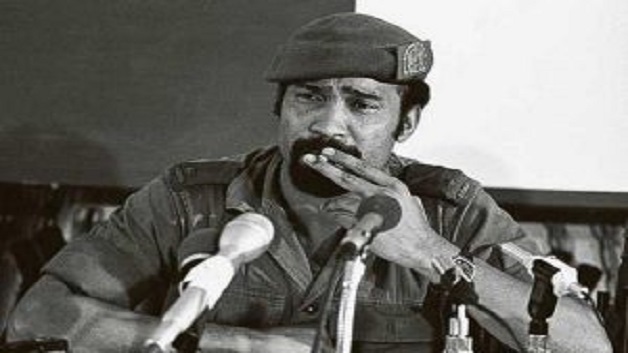 The lawyer for Suriname’s President Desi Bouterse, who is accused of involvement in the 1982 murders of 15 political opponents of his then military government, yesterday asked the Military Court to acquit his client after brandishing the victims as “traitors”.

Attorney Irvin Kanhai said the National Army did Suriname a great service by eliminating the opponents of the then military government telling the court that as a result, a larger bloodbath had been averted.

He told the court that one day in the future “we will pay tribute to our soldiers for what they did for us on December 8, 1982 and that we will honour them”.

Kanhai told the Military Court that the entire indictment should be dismissed. He deemed the case inadmissible since the court refused to take into account an Amnesty Law which was passed during the course of the trial in April 2014.

Last year, Bouterse along with 23 co-defendants appeared in the Military Court after the Court of Justice had earlier rejected a motion to stop the trial. The former military officers and civilians are charged with the December 8, 1982 murders of the 15 men that included journalists, military officers, union leaders, lawyers, businessmen and university lecturers.

The prosecution alleges that the men were arrested on the night of December 7 and 8 of that year and transferred to Fort Zeelandia, then the headquarters of the Surinamese National Army. They said the men were tortured that night and summarily executed.

No visitation for Venezuelan mom who sold baby to Trinidadian couple