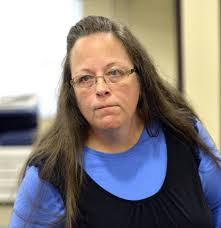 A US federal judge has ordered that a Kentucky official be jailed for contempt of court after she has repeatedly refused to issue marriage licences to gay couples.

According to Reuters News Agency, Rowan County Clerk Kim Davis was led away by U.S. marshals who confirmed she was under arrest.

Ms. Davis has refused to issue licenses to any couples, gay or straight, since the U.S. Supreme Court in June ruled that same-sex couples have the right to marry under the U.S. Constitution, citing her Christian beliefs.

“The court doesn’t do this lightly,” District Court Judge David Bunning said in ordering that she be taken into custody.

Bunning also said his earlier injunction ordering Davis to issue marriage licenses applied to everyone and not just the four couples whose suit in July had accused Davis of not doing her job.