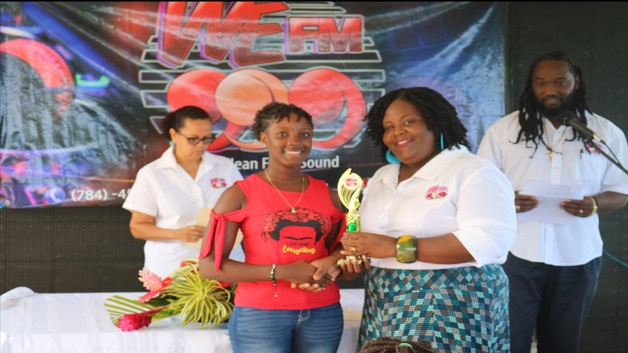 Jaydealeah Chambers has been named as the winner of WE FM’s 2019 summer reading challenge.

The announcement was made this morning by programming manager, Donnie Collins, during a special ceremony to mark the official close of We FM’s summer reading challenge.

Chambers, also a student of the Girls High School, won the competition from among four other competitors, following her participation in We FM’s Live News reading challenge, held on Friday August 9. She received a tablet from Courts St. Vincent Limited and a trophy compliments PC420 Neville Richards.

Second position was taken by Lafika Samuel also of the Girls High School, who received a smart phone from flow, while the third position went Tia Jacobs of the St. Joseph’s Convent Marriaqua, who received a gift voucher, compliments Juju B.

Leah Johnson of the West St. George Secondary School received a special award for the most improved participant. Apart from the certificates of participation, each of the participant also received Junior  Savers accounts  distributed by Melissa York-Nichols of the St. Vincent and the Grenadines Teachers Union and meal vouchers compliments KFC.

The reading challenge, which ran from Monday August 5th to the 9th on the theme Building Better Readers – exposed the participants who were between the ages of 12-15 to training in fluency, confidence, voice, diction and various careers in the media.

St. Vincent and the Grenadines offers school places for children from countries devastated by...

400 people in besieged Syrian town needs to be urgently evacuated for medical treatment,...