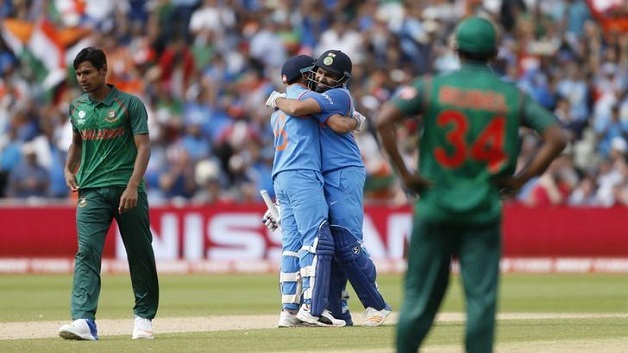 India put on a display of composed and confident batting as they cruised into the final of the Champions Trophy with a nine-wicket victory over Bangladesh on Thursday, setting up a clash with old rivals Pakistan on Sunday.

A masterful unbeaten 123 from Rohit Sharma at Edgbaston Cricket Ground in England steered the defending champions to victory with nearly 10 overs to spare after they were set a target of 265 by Bangladesh, playing in their first semi-final of a major tournament.

Meanwhile, West Indies’ chances of an earning automatic qualification for the 2019 World Cup took another damaging blow when they dropped two rating points from 79 points to 77 in the latest ICC One-Day International rankings released on Tuesday.

The Caribbean side dropped from 79 points to 77 following their stunning 63-run defeat to Afghanistan last Friday, in the opening ODI of the recently concluded three-match series.

England, along with the next top seven-ranked sides in the world, will earn automatic qualification for the World Cup, with the remaining sides entering a qualifying tournament to determine the last two available berths.

West Indies are currently ranked number nine. They are expected to face a stern challenge when they take on India from June 23 to July 6 in a five-match series in the Caribbean. They also travel to England for a similar five-match series from September 19-29.