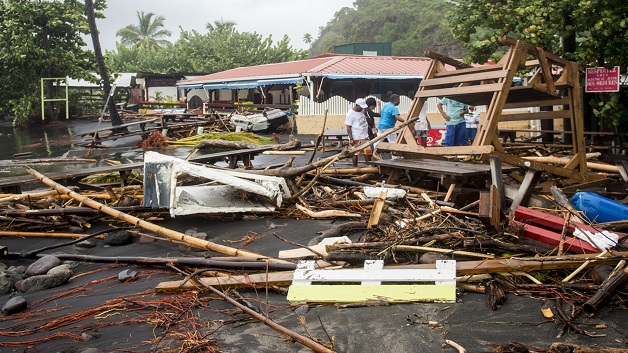 The housing stock in Dominica has been severely damaged following the passage of Hurricane Maria, a catastrophic category 5 storm, on Monday night.

He said many of the roads were not badly affected, however most houses were severely damaged, if not destroyed, with many having lost their roofs.

Henry, who spoke with Prime Minister Skerrit via Satellite phone, said there is an urgent need for helicopter services to take food, water and tarpaulins to outer districts for shelter.

“As far as the physical structure is concerned fortunately most of the roads were not as badly affected as we had feared but certainly the housing stock is very severely damaged if not destroyed in many instances.”

“There is the very urgent need at this time as far as housing is concerned, coverage, because many of the public buildings that were used as shelters they themselves fell victim to this category five hurricane and many of them are now without roofs. So even though you have scores of persons gathered together in some of these shelters they are really sleeping at night under the elements because there is absolutely no roofing structure in place,” Henry explained.

He said about seven persons are known to have died as a result of Hurricane Maria, however, authorities expect the death toll to rise.

“There are not much mass causality as such, unfortunately the fatality rate at this point number is about seven and the reality is that that unfortunately is likely to climb.”

Despite the devastation, particularly in the east of the island, Mr. Henry said Dominicans remain positive and resilient.

“The spirit of the Dominican people have been bent somewhat but they are still very much determined, they are a very resilient people, this has been a very serious punch to the heart but not to the soul of the Dominican people and they are very eager to get up brush themselves off and get going again. The unfortunate thing is that they do not have the resources,” he said.

Henry noted that just about two years ago Dominica was impacted by tropical Storm Erica “and therefore everything over the last two years have gone into the rebuilding effort which has now been brought back to zero or perhaps minus zero.”

He said that presently Antigua and St. Lucia are being used as the main ports for relief supplies going to Dominica.

29 Medical students to receive White Coats when All Saints University holds its 16th...