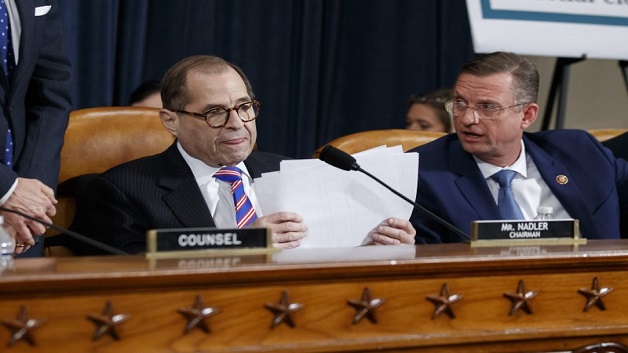 Pushing ahead with articles of impeachment, the House Judiciary Committee convenes on Monday to formally receive the investigative findings against President Donald Trump as the White House and its allies launch an aggressive attack on Democrats and the proceedings.

Chairman Jerrold Nadler expects the committee to vote soon, possibly this week, on at least two or more charges against the Republican president.

Democrats say Trump’s push to have Ukraine investigate rival Joe Biden while at the same time withholding US military aid ran counter to US policy and benefitted Russia.

It could result in impeachment charges of abuse of power, bribery and obstruction.

The hearing sets off a pivotal week as Democrats march towards a full House vote expected by Christmas.

In drafting the articles of impeachment, Speaker Nancy Pelosi is facing a legal and political challenge of balancing the views of her majority while hitting the constitution’s bar of “treason, bribery or other high crimes and misdemeanours”.

Trump and his allies acknowledge he will likely be impeached in the Democratic-controlled House, but they also expect acquittal next year in the Senate, where Republicans have the majority.

Trump’s team is turning its attention elsewhere, including Monday’s release of a long-awaited Justice Department report into the 2016 Russia investigation.

WE FM - The Clean, Fresh Sound
Contact us: [email protected]ail.com