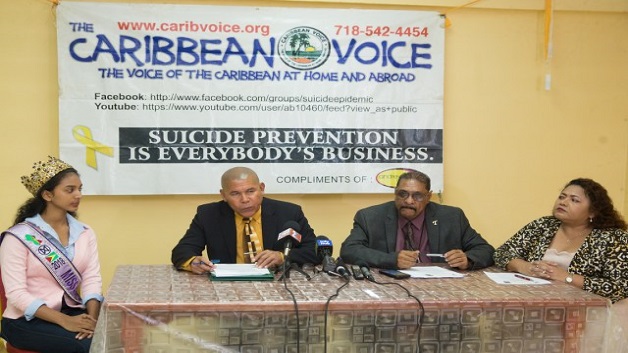 Guyana, which has one of the highest rates of suicides globally, has launched an anti-suicide campaign aimed at raising awareness of the situation.

The Anti-Suicide, Anti-Violence Campaign is being organised by Caribbean Voice (TCV), in collaboration with Voices Against Violence.

Minister of Social Cohesion, Dr. George Norton will be their patron and Miss World Guyana, Ambika Ramraj their spokesperson.

The month-long campaign is aimed at raising awareness on the issue of suicide and is set to end with candlelight vigils across the country on the eve of September 10, which is internationally observed as World Suicide Prevention Day.

A 2012 World Health Organization report indicated that Guyana had a suicide rate of 44.2 per 100 000 people, and that for every single female suicide, there were 3.2 male suicides.

TCV National Director, Nizam Hussain, said while September 10 is observed as World Suicide Prevention Day, the organisation has taken it a step further by adding “Anti-Violence” to the campaign because suicide has become increasingly associated with domestic abuse.

UK expands its diplomatic network across the Caribbean