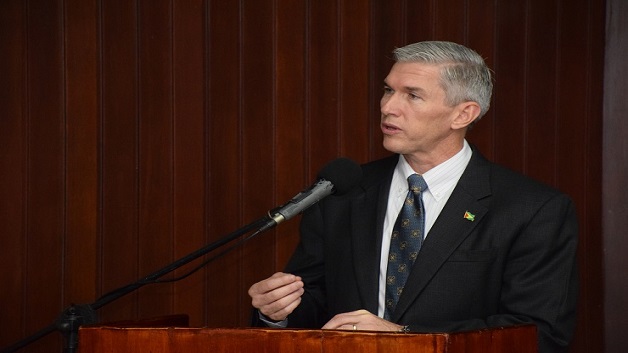 Oil and gas giant ExxonMobil says it is likely to commence oil production in Guyana by March 2020.

Exxon’s Country Manager Rod Henson made the disclosure during a recent press conference where contents of the Stabroek Petroleum Agreement between the oil company and the Government of Guyana were shared.

Guyana and ExxonMobil entered into an agreement in July 2016, which will see the CARICOM nation receiving a 50/50 profit and a two percent royalty.

Oil from just the Liza Phase One could be over US$1.5 billion after five years and over US$7 billion over the life of the project.

“We are estimating around March 2020 right now. That’s when production will start, and it will be somewhere between 100,000 and 120,000 barrels a day and we continue to try to accelerate on that…We are trying to do this as we safely can,” Henson told journalists.

The oil production in 2020 will represent only a fraction of the Liza field, Henson said.

Meanwhile, defending the US$18 million bonus paid to the Guyana government and the company’s hesitation to make that detail public, Henson reminded that the oil industry is a competitive one, where commercial information is not generally disclosed.