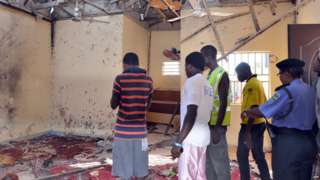 Two bomb attacks in north-eastern Nigeria have left at least 37 people dead and more than 100 injured, officials have said.

At least 30 people died when a bomb targeted a newly opened mosque in the town of Yola, according to a BBC News report.

Earlier, seven people were killed in a suicide bombing in Maiduguri.

No-one has claimed responsibility for the bombings but the Islamist group Boko Haram has carried out many attacks in the area.