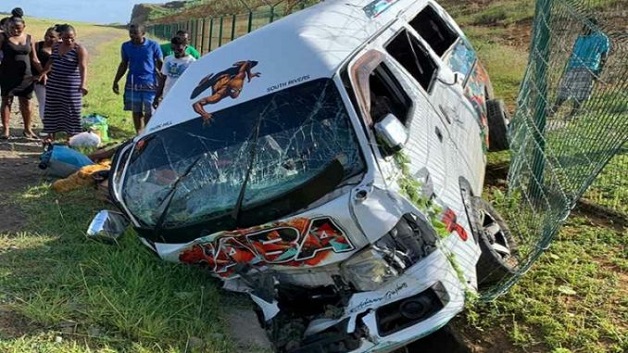 On Saturday July 20, at 3:40 p.m. motor omnibus HX819, a white Nissan Caravan, owned and driven by Mr. Ashaki Dellimore of South Rivers and motor vehicle (M/V) T14, an orange and blue pick-up truck owned by Finishing and Furnishing and driven by Mr. Omri Mayers of Brighton collided on the Argyle Public Road in the vicinity of “Still Waters Resort”.

According to a Police report, both vehicles were badly damaged.

The passenger van was travelling from Kingstown towards Biabou with seventeen passengers while the pickup truck was exiting the junction at Still Waters Resort heading towards Brighton.

As a consequence of the collision, the van veered off the road and ran into the border fence of the Argyle International Airport resulting in some of the passengers including the driver sustaining minor and serious injuries including broken limbs.

The driver of pickup truck was also injured.

The injured persons were taken to the Georgetown Hospital, Stubbs Polly Clinic and the Milton Cato Memorial Hospital respectively where they received medical attention.

The majority of the victims were treated and released while four still remain hospitalized at the Milton Cato Memorial Hospital.